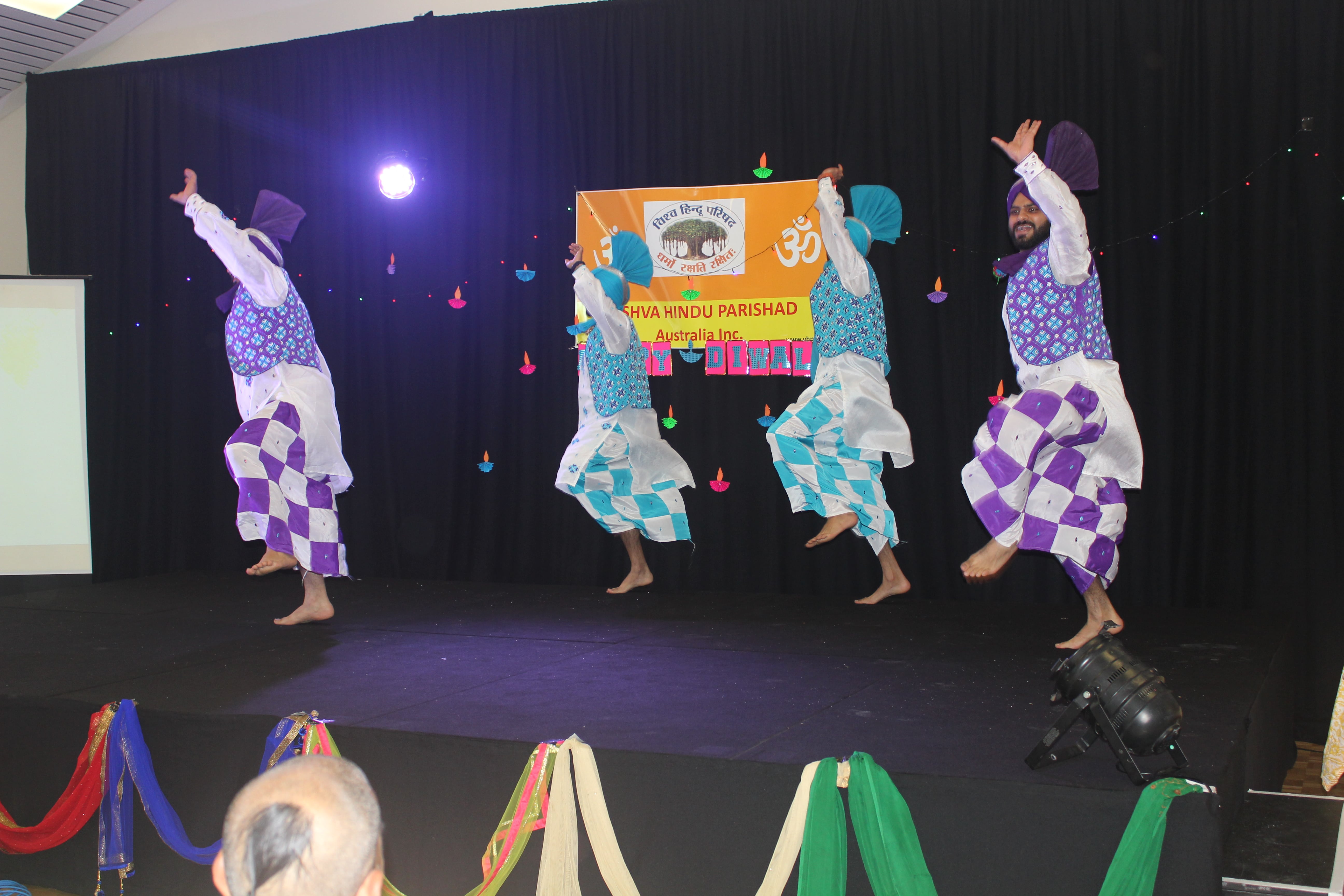 The 22nd of October,2017 saw over 135 people come together to celebrate Diwali in Carramar Community Centre organised by the Vishva Hindu Parishad of Australia Inc.,WA Chapter. This cultural evening was packed with stage shows and workshop for kids. The chief guest, Hon. Mayor Tracy Roberts from the Council of Wanneroo danced to the tunes of Bollywood and Bhangra music.

The evening started at 4:00 pm with Mrs. Bhavani Murthy, President of the Cultural and Vedic Centre, Perth introducing Diwali, its rituals and how it connected Hindus across the globe. She chanted a few mantras later and Hon.Mayor lit the lamp in front of lord Ganesha and officially started the festivities.

Mrs.Neha Shinghal, President of the Vishva Hindu Parishad, WA talked about the organisation and its role in bringing Hindus, different temples and organisations together. She said that she was humbled to see how they had grown since inception last year at Diwali 2016. There were representatives from various Hindu temples and Indian organisations present along with people from the wider community.

The first on stage was a group performance by Janavi Deshpande, Hazel Gathani, Nirjari Malani, Saanvi Savla and Aishwaraya Gudodgi on Udi Udi Jaaye from the Academy of Indian Classical and Bollywood Dance.

Sakha Krishna Das ji, a Russian born musician, practicing Hinduism from the past few years took on the stage with his keyboard next. He sang a bhajan and involved the crowd with his lyrics. Everyone took part and enjoyed it to the core.

Hon. Mayor Tracy Roberts gave her speech next in which she applauded VHP for doing the wonderful job of bringing the community together and adding more vibrancy to her Council. She mentioned that she had seen VHP when they launched this branch last year and was absolutely delighted to see how far they had come in an year.

Gayatri Shinghal played her guitar next. In her performance were 2 songs- Icka and Ode to Joy played beautifully by her. The next performance was from the Baldja Moort Aboriginal dance group who did traditional dancing and played the didjeridoo, captivating the audience. After that Mrs. Mina Gathani, Secretary of the Vishva Hindu Parishad was on stage explaining about Hinduism, its roots and the global Hindu community. There was a solo performance done by Hazel Gathani next on Bajirao Mastani. 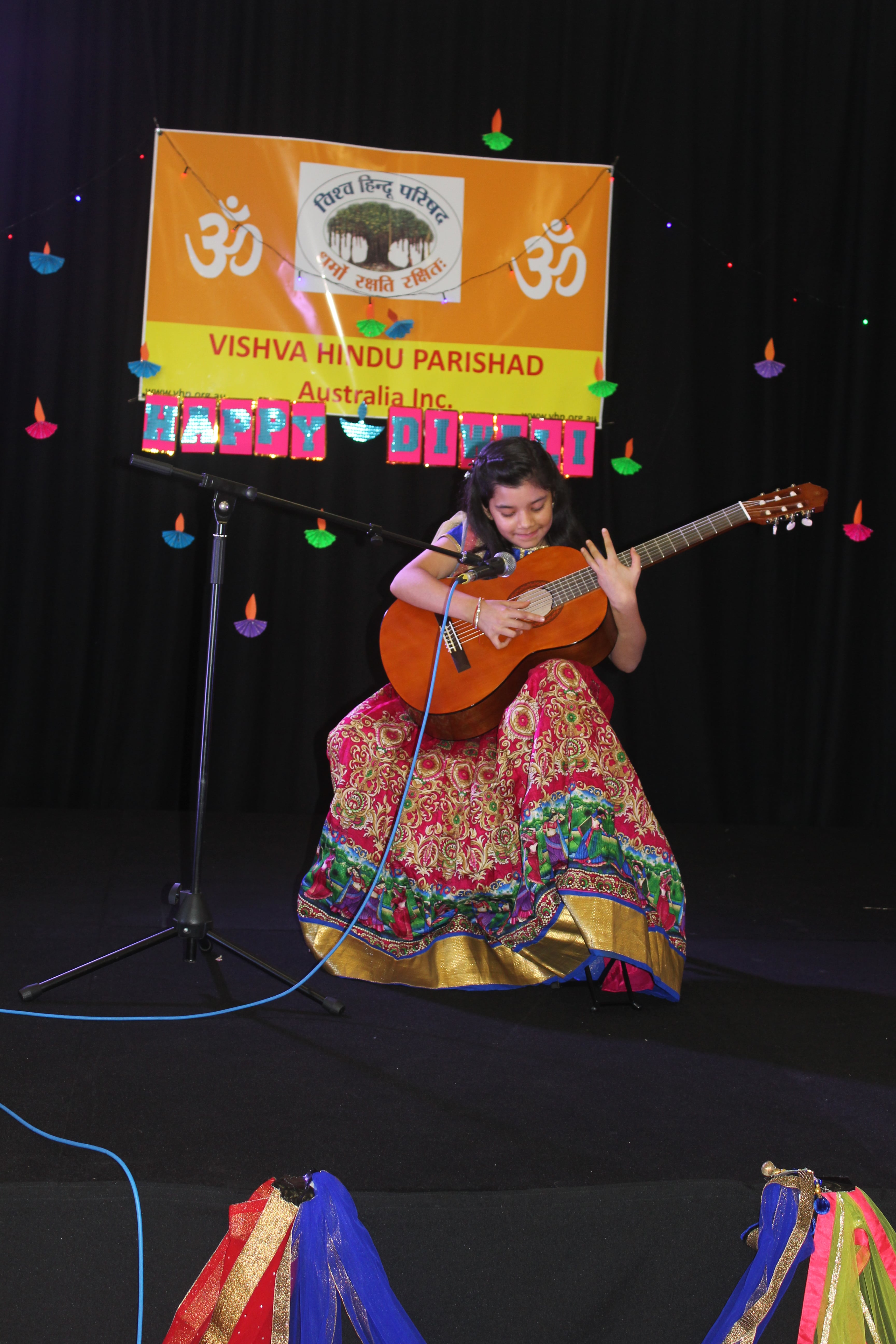 Natasha Myers sang Suit Suit Kar Da beautifully after this. The bhangra group, Bhangra Rulez came on stage next. They brought so much energy on stage that everyone enjoyed it including the Hon. Mayor who also stood up and danced with the girls.

Hazel Gathani, Disha Parmar and Nirjari Malani danced to the tunes of a Bollywood number, Pinga. And another wonderful performance followed by Natasha Myers on Prem Ratan Dhan Payo next. For the very last dance, came on stage The Dance Touch and Abi and her dancers set the stage on fire with Dhoom Machale. They did a dance workshop afterwards and everybody joined in.

Everybody went on stage for a group picture and the buffet was served straight after. A wonderful evening with all elements of entertainment in the right mix.

Mrs.Neha Shinghal thanked all volunteers and friends among whom a special mention was made to  Mr.Varun Gupta from Cellarbrations,Clarkson and Saanvra Indian Grocery Store in Clarkson for their support. Mr. Nitin Gathani from Cabot Square for his donation, Community Newspaper Group, Council of Wanneroo and Hon.Mayor Tracy Roberts. Apologies of those who could not attend included Hon.Paul Papalia, Minister for Tourism, Racing and Gaming,Small businesses, Defence Issues, Citizenship and Multicultural Interests, Hon.John Quigley,Attorney General,Member for Butler,Mr.Amit Mishra,Consulate General of India, Ms.Sabine Winton,MLA Member for Wanneroo, Hon.Peter Collier, MLC Member for North Metropolitan Region,Shadow Minister for Dsability Services:Housing, Leader of the opposition in the Legislative Council and Mr.Yaz Mubarakai,MLA Member for Jandakot.