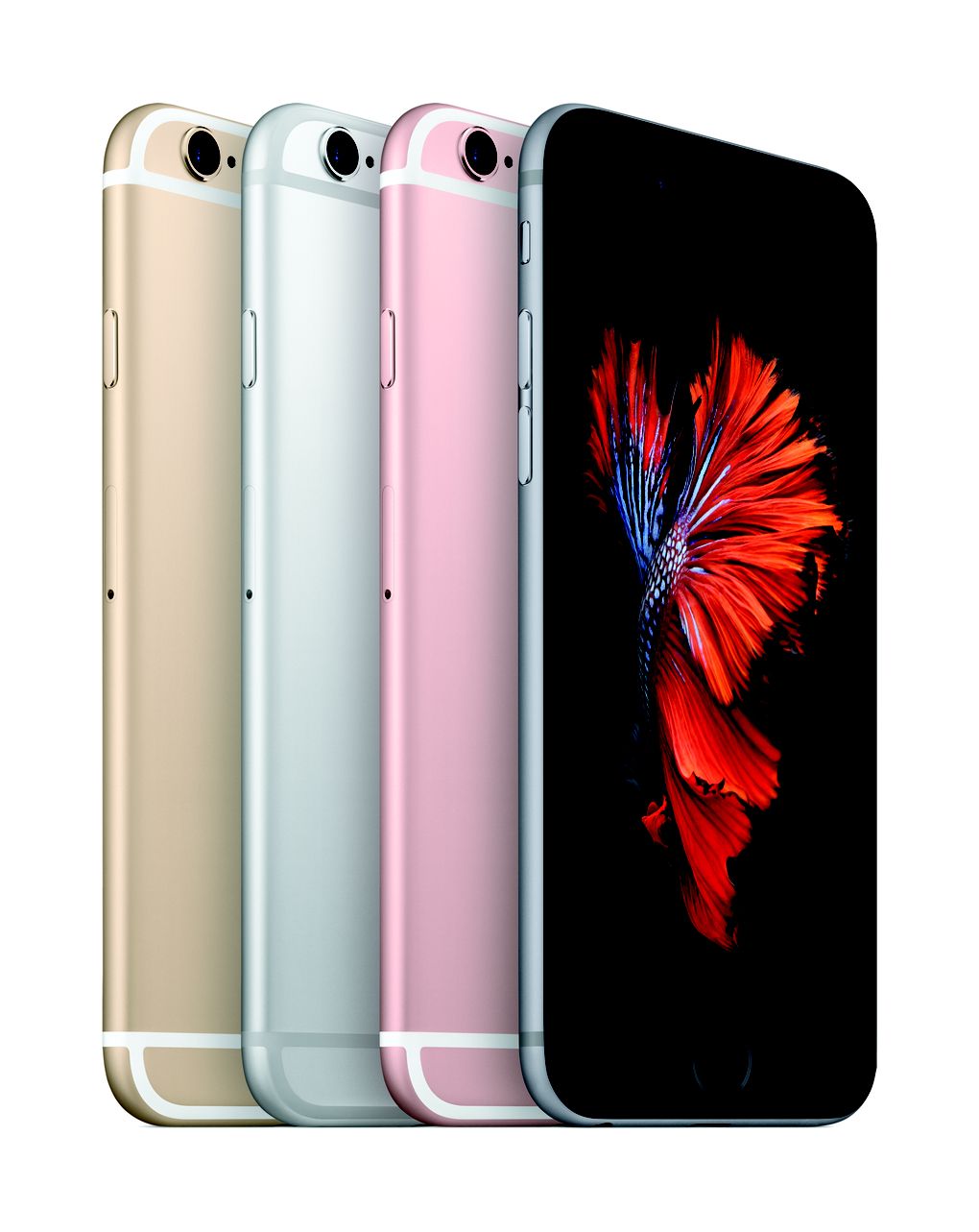 Apple has unveiled new iPhones, an updated version of its Apple TV, which now has its own app store and a voice-controlled remote control, as well as a 12.9-inch iPad Pro at a media event in San Francisco.

The new phones, called iPhone 6s and 6s Plus, which look like their predecessors that debuted last year, add an improved camera, speedier processor and a new feature called 3D Touch that lets users make different commands and reach shortcuts and menus by pressing down harder or softer on the screen. The handsets come in four colours — silver, grey, gold and rose gold.

The phones will be available in Australia on September 25, and can be pre-ordered from Saturday, September 12. The least expensive iPhone 6s, which has 16GB of storage, will cost $1079. The larger 6s Plus starts at $1229.
Advertisement

“While they may look familiar, we have changed everything about these new iPhones.” Apple boss Tim Cook said.
“They are the most advanced smartphones in the world.” 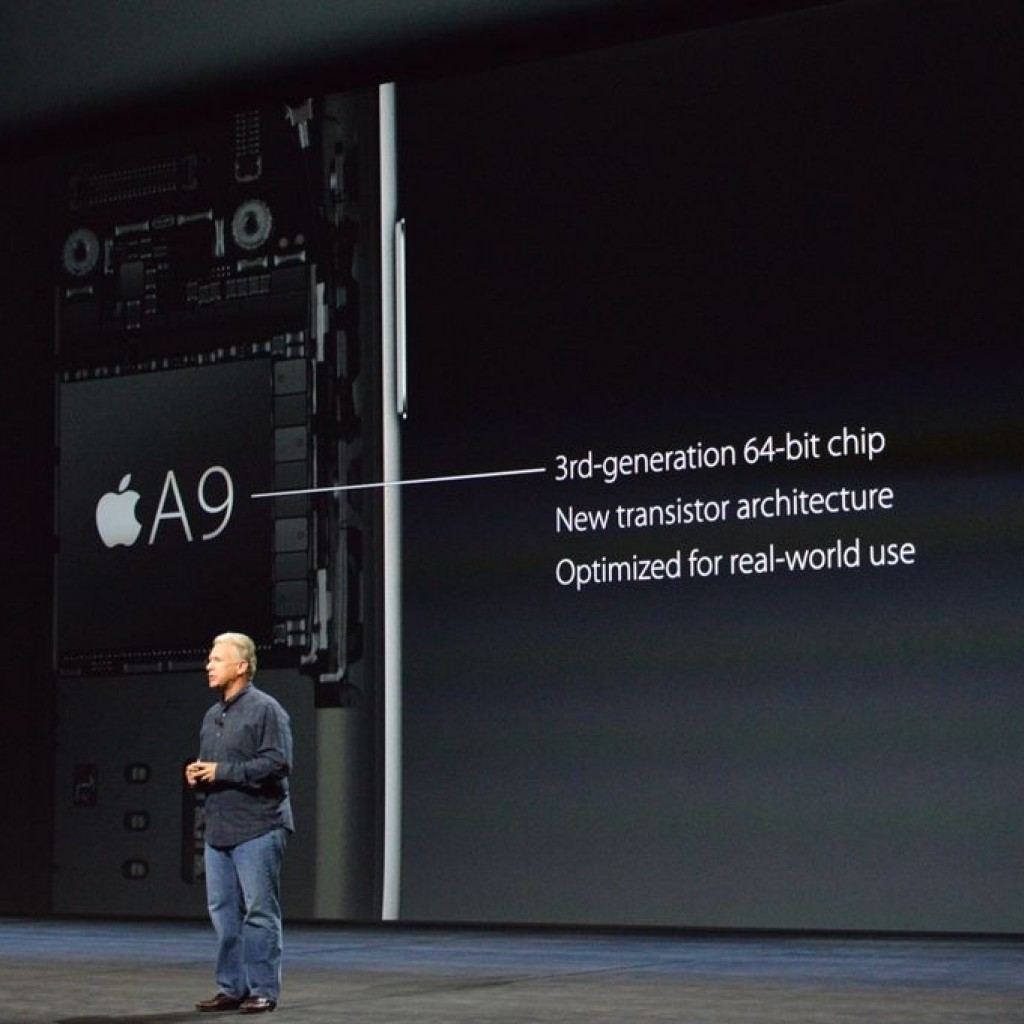 6 NEW FACTS about the iPhone 6s and 6s Plus

Maybe you never cared for the garish yellow gold Apple released to appeal to the Chinese market. Maybe you want your phone to match your crazy expensive rose gold Apple Watch (or the just-announced rose-gold-coloured aluminum Apple Watch Sport you plan to buy). Whatever your rationale, if you wanted another option besides gray, silver and yellow gold, you got it.

As predicted, Apple has renamed Force Touch as 3D Touch and implemented it in its new iPhones. The name reflects the fact that there are three levels of pressure you can now apply to the screen for different results.

Regular tapping works as it always has. Press lightly — on a photo, email or web page for instance — and you’ll get a preview of the content without having to leave the screen you’re currently on. Pressing more firmly will allow additional options, for example opening your camera app directly into selfie mode.

The main camera on the 6s and 6s Plus has been improved over last year’s phones. The new camera is 12MP (compared to 8MP on the iPhone 6) and features a custom Apple-made signal processor the company says will produce more accurate colour than past models.

The front selfie camera is now 5MP (up from 1.2MP). Curiously, rather than add an unsightly flash to the front of the device, the phone’s display will flash white at max brightness to illuminate your subject when you take a picture. Apple calls this ‘Retina Flash’, which one hopes is not a commentary on the effect it will have on your ocular tissue.

There’s also a new software innovation Apple is calling Live Photos, which records the moments before and after you take a picture to allow for more animated shots.

In addition to 3D Touch and the new camera, a lot of subtle tweaks have been made to the way the iPhone is put together.

New, stronger aluminum and glass makes the device stronger than its predecessors (and presumably less likely to bend).

An all new 64-bit A9 processor, with an embedded M9 motion co-processor, will not only let the phones crunch data and apps harder and faster but will also let them run low power services for much longer.

Connectivity has also been bumped up to bring iPhone in line with its more cutting edge competitors. The change means faster internet speeds on next-gen mobile networks like Telstra’s 4GX, as well as better 4G mobile reception while roaming internationally.

This one is a bit of a cheat, as iOS 9 will also be coming to older iPhones as well as iPads and the iPod Touch, but it is launching with the 6s and 6s Plus.

A big bump in efficiency in iOS 9 promises longer battery life, which should be especially noticeable with the improved processing on the 6s and 6s Plus.

On iPhone the operating system also has a new Android-like app switcher for better multitasking, an improved keyboard and some handy tweaks to built-in software like Notes and Maps. 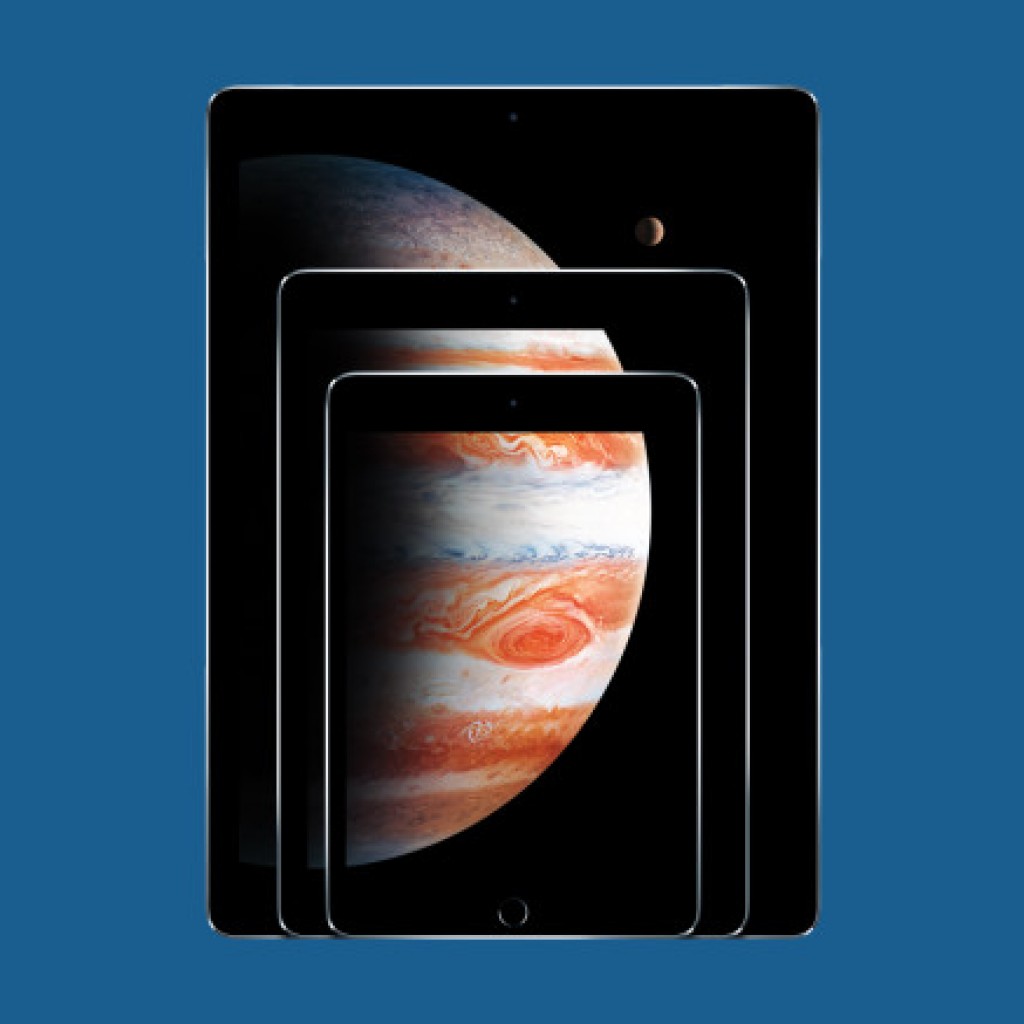 There’s Apple’s best-seller — the iPhone — and then there’s iPad. That’s not to say that iPad is a poor product; quite the opposite, actually, with the word “iPad” having become synonymous with “tablet.” The issue is around tablets themselves. Consumers don’t upgrade them as often as they do smartphones, and iPad sales have been slumping.

Apple’s solution? Going all in on iPad, showing off a souped-up version of iPad today called iPad Pro. If you’ve been reading the rumors leading up to the event, you’re not remotely surprised by this.

What I was surprised by, when I got some hands-on time with the tab today, is just how large it is. It has a 12.9-inch diagonal display. This is not your iPad mini, or any other 7-inch tab. This is not a cross between a tablet and a phablet. It doesn’t even feel comparable to your standard 10-inch variety. It feels…big.

Technically, it’s slightly thicker than last year’s iPad Air 2 (6.9mm thin vs. 6.1mm thin), and it weighs about a half a pound more. All that said, given its size and 10-hour battery claims, it’s still remarkably light.

So, aside from size and the fact that it has 78 percent more screen area than other iPads, what makes this worthy of the “Pro” moniker?

First off, it’s running on Apple’s new A9X processor, which the company says is a desktop-class CPU.

With 5.6 million pixels, it has, according to Apple, the highest-resolution display of any iOS device — higher than even a Retina MacBook Pro. The display also has increased sensitivity, due in part to its brand-new sidekick: the Apple Pencil.

Yes, Apple made a stylus.

This is the part where the iPad Pro starts to sound a lot like Microsoft’s Surface tablet. The aesthetics are very different, but until we can get our hands on the iPad Pro for an extended period of time it’s tough to say exactly how powerful it is (or how useful its accessories are).

I can tell you that the $99, all-white stylus felt light in the hand when I used it to scribble in Notes and draw on a picture in Apple’s native Mail app. It also felt fast, unlike some styluses that suffer from latency issues. But again, I didn’t use it for an extended period of time.

As with Microsoft’s Surface Pro stylus, you can use it with certain applications, but not all applications.

There’s also an iPad cover that doubles as a “smart” keyboard, that will sell for $169 with iPad Pro. One difference between it and other accessory keyboards is that it’s covered in connective fabric, and the keyboard itself has no internal battery. It’s powered entirely by the iPad. Most shortcut commands are the same as the ones on a standard Mac, though some app-specific commands are likely to emerge as developers make iPad apps with the keyboard in mind.

Of course, Microsoft also makes an accessory keyboard for its Surface tablet. Perhaps fittingly, Microsoft executive Kirk Koenigsbauer was the first person Apple’s Phil Schiller welcomed on stage after the iPad Pro announcement, to show the capabilities of Office for iPad on the new tab.

A new Adobe app, called Adobe Fix, was demonstrated as well. A woman’s unsmiling face was automagically turned into a smiling one, with Adobe Fix.

A rich listening experience at every turn.

With four new high‑fidelity speakers built directly into its unibody, iPad Pro creates an audio experience as big as its display. The new design produces an engaging soundstage with three times the acoustic output of iPad Air. But it goes even further than that. iPad Pro automatically adjusts the orientation of the high frequencies according to how you’re holding it. So whether you’re playing a game or watching a movie, the sound of iPad Pro is more immersive than ever. 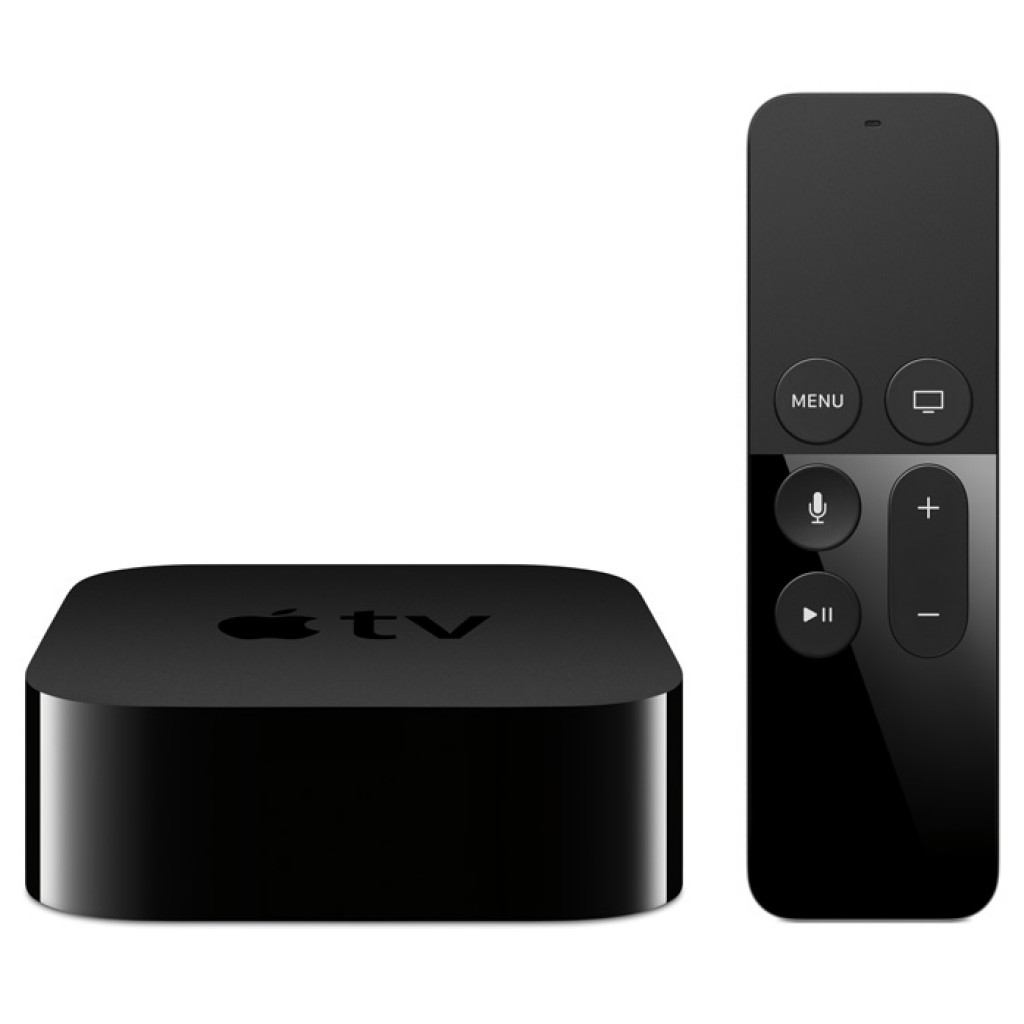 The new Apple TV is here to finally put all the rumors to rest. But, with three years since the last version was released, Apple’s new box has a lot of catching up to do. Resolutions, apps and games — a lot has changed for set-top players. To make things a little easier, we’ve lined up all the need-to-know information about the the 2012 and the 2015 Apple TVs to see the difference a few years can make.